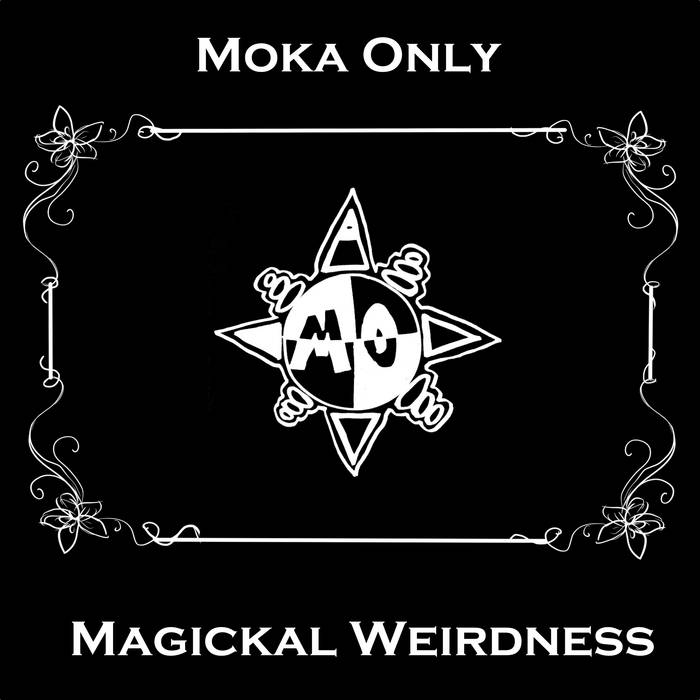 Travis Button I remember first hearing Moka on Factor's Lawson Graham and being immediately hooked on the sound of that delivery. He has a flow that is oh so cool and I could listen to it all day. This album is the shit! Got the cassette distorting hard in the 91' Camry! Favorite track: We never think.

Nic Brown Daniel Denton is so prolific, he'll probably have recorded another three albums in the time it's taken me to write this, so just to be going on with, here are 32 (count 'em) more pearls of wry, observational Moka wisdom set to 32 more smoky, souled-out grooves over 32 more clips of smooth, buttery beats. The hardest working man in hip-hop makes the easiest listening joints. Well that's magickal weirdness for you. Favorite track: Um yeah hey.

PRESS - EXCLAIM
"As previously reported, Vancouver rap wizard Moka Only promised to show us an epic display of his Magickal Weirdness this summer. A mage of his word, Moka's officially made his latest audiobook of spells go live today (July 17), via his new Beautiful Records imprint and Urbnet.

In addition to the previously revealed two-stepper "No," the West Coast martian has let loose another 31 tracks that range from the smooth and jazzy "Light of Your Life," to the '90s throwback-styled crate-digger quest "Chicanery," to the space age keyboard groover, "Cosmology."
~~ Gregory Adams | exclaim.ca/Music/article/moka_only-magickal_weirdness_album_stream

MOKA ONLY
If you haven't heard of Moka Only by now, you will after his latest release Magickal Weirdness, dropping July 14th, 2015. Moka has released countless albums since the late 90's, working with legends like; MF DOOM, J Dilla and most notably, Swollen Members -- where he shared three Juno's, Seven MuchMusic Video Awards and Seven Platinum plaques during their success.

2015 is a very special year for Moka Only, as he has just launched his own record label with his manager Nic Bambrough, called Beautiful Records. Moka's label is a subscription based label, offering all his latest releases (and some unreleased material), plus tons of awesome extras, for a low yearly membership fee.

Magickal Weirdness will be released through both Beautiful Records and URBNET as a partnered release, with four video singles, a feature from Grand Puba and almost a year of international touring with artists like ILLA J, Tanya Morgan and more.

You can visit beautifulrecords.ca for more information on Moka's record label, or through his social media sites.

Moka Only first fell in love with hip-hop in middle school. He says there was "nothing else like" the music and culture. He quickly began rapping and writing graffiti, but says he didn't really take it particularly seriously until he was in his late teens. It was then that he opted to put down the spray can and start rhyming full time.

"I was really into going out on night missions and trying to make my mark," he says. "I got a little name through graffiti, but when I had to choose between the two, I didn't want to be involved in illegal activities while trying to push a professional music career."

In 1995, Moka Only co-founded the Swollen Members after returning to Canada following a stint in San Diego. (He came up with the name in a Denny's, because he liked the double entendre.) That said, he soon left the group to work on his solo material. While Moka may have an almost mind blowing number of releases under his belt, his commercial peak came when he re-joined the Swollen Members in 2002. The group had several number one hits, and in 2005, Moka left the group again, concerned that it was taking time away from his solo work.

Moka Only is also renowned as a man of many names, releasing under pseudonyms like Ron Contour and Torch. He says that the different aliases allow him to tell different stories.