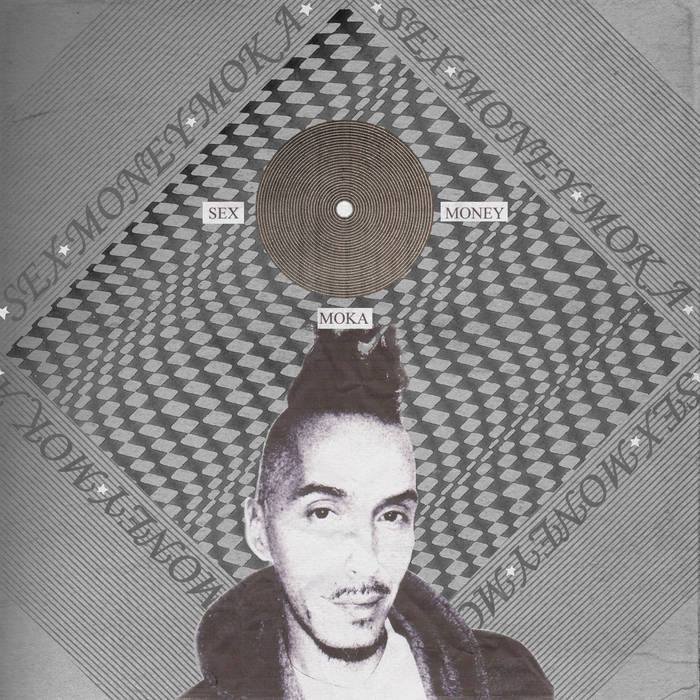 Josh S This man works with a passion, he’s hard work pays off because he has real fans that he calls torcharrons. I’m one of them and there’s a reason why I support him, the band and it’s djs.

Matt Slayter Im a Big Moka Only fan and I Have been so stoked on all of his new albums! He's on fire like NBA Jams status y'all. This album is smooth all the way thru and Moka has developed as an artist tremendously over the years. His music just keeps getting better and better. Im also stoked cause this is a classic. MUST HAVE if your a Moka fan yeah. Favorite track: Inside My Heart.

David possibly the most underrated rapper/producer artists I know of, love almost everything this guy puts out. Favorite track: Always Happy.

PRESS: “Another great release from super champion MOKA, ‘Sex Money’ with 80 Lps released already under his belt still delivers good projects with a touch of nostalgia. Always different but stilll relevant with constant material whether it be with the lyrics or the productions, not to mention also fellow producer from Columbus, Ohio, JON ROGERS a.k.a M∆GGZ who elaborates a dope head nodding banger."
~~ dabluefunk.org/moka-only-sex-money-lp/


“Canadian producer/MC digs back in the vaults and unleashes Sex Money Moka, a 19 track excursion of melodic, Dilla-esque beats and his trademark flows."
~~ bamalovesoul.com/headlines/moka-only-inside-my-heart/


"Canadian emcee/producer Moka Only is back with his latest release Sex, Money, Moka. A departure from his Airport series, this is a straight jam record, with a definite emphasis to keep the body moving (reminiscent of early De La Soul)."
~~ Mr. Rust / thefindmag.com


"As sure as the sun rises in the east and winter gives way to spring, Moka Only will tirelessly turn out new records at a near-seasonal clip — or at least he has for about the last decade. Having long found his musical sweet spot — a breezy blend of clean, simple and often soulful sample play paired with easy-going rhyme style — the Vancouver native has remained consistent in both sound and substance, never straying too far from his established recipe, and that's not bad thing. Moka's latest set, SexMoneyMoka, sticks pleasingly to plan, unfurling with the immediately familiar hypnotic rhythms, muted bass tones and chopped guitar accents of Dilla-era Common and Slum Village (not surprising, as some of the album's beats date back to at least 2003), with the rapper/producer's sly sex talk and relaxed boasts completing the form.

The humble MC approaches being consistently slept on without a hint of bitterness on the soulful "Always Happy", sprinkles a bit of vocal sunshine on cuts like "Inside My Heart" and "Trying To Be Fly" and rides the record's general throwback vibe with a relatable cool that eases the soul, turning out a tight and timely collection of springtime headphone stroll music in the process."
~~Kevin Jones /
exclaim.ca/Reviews/HipHop/moka_only-sexmoneymoka


"One of the most consistent real, underground, boom bap emcee in the game Moka Only dropped a new 19 track album called “Sex Money Moka”. And apparently Moka changes his name again, now he calls himself Karrem Sareem. A few of the stand outs for me is “Love And Happiness” featuring another dope emcee LMNO, “In My Heart”, “Always Happy”, “You won’t Get Much Higher” is my joint, “Rhyme Is Wow” and that beat on “So Much Ta Go On” Is so sick!! THIS IS HIPHOP!!!"
~~ Crazy Al Cayne / sugarcayne.com

"...if you’re a fan of Common you’ll thoroughly appreciate this album. It’s a smooth listen and will have you vibing and bobbing along to tracks like ‘I’m Coming on the World’ and ‘Rhyme is Wow’. This album tells a different story, contrast to his previous aliases Ron Contour and Torch which characterized specific time spans of his life, Moka Only is his current form and the maturity of his rap career does come through in this body of work. The formula is not experimental, he knows what works and what he’s created is a concise and attractive album. His fine-tuned sound comes from two decades of rapping and an 80+ discography under his belt, not to mention collabs with MF Doom and J Dilla to name a few. Peep his new album below and have a listen to For Me and Always Happy"
~~ Tara Magloire / knownunknowninc.com


"This new project finds Moka sticking to a formula that he has successfully followed for quite some time now. It's a formula that involves multi-syllabic rhyme patterns, dusty samples and (with 80+ albums under his belt) what seems to be a highly efficient workflow. Moka doesn't reinvent the wheel on this one but why would he when he's getting such incredible mileage? His Torcharoons will surely enjoy this one. Be sure to listen to stand-out tracks, I Wanna, For Me, and Always Happy."
~~ Julian Quinones / gettin-up.com


“Moka Only punctuates his verses with choruses that bring an RnB touch that’s always great in the hip hop universe. The album incidentally synthesizes the style developed by the MC through the last decade. We can even hear some beats produced in 2003 these being compared by some enthusiasts with J Dilla’s productions.” (translated)
~~ ozartsetc.com

BIOGRAPHY: If there's one thing that Moka Only's known for, more than his emcee and production abilities, it's his almost unfathomable work rate. In nearly two decades of rapping, the Victoria, BC native has released over 50 albums, worked under multiple aliases - including Ron Contour, The Durable Mammal and Flow Torch - and collaborated with the likes of J Dilla and MF Doom. He's also been a part of several groups, including Code Name: Scorpion, The Dominant Mammals, Cryptic Souls Crew and most notably the platinum selling Swollen Members, which he co-founded and named. It's no wonder they call him "The Most Prolific." To Moka Only, though, that work rate doesn't seem like a big deal."I don't think there's anything special about it," he says "I don't see why it's such a difficult thing for artists to grasp. I hear other people say "How do you do it?" How do you not do it? Music's my only job."

But it all began rather humbly in his hometown of Victoria, BC, where Moka Only discovered hip hop culture at an early age, starting out as a graffiti artist before switching to rhyming at house parties and freestyling anywhere and everywhere alongside partner K-Prevail (recording together as Splitsphere). In 1994, Moka made the move to San Diego in order to further his rap career, creating a number of connections that he would later use to his advantage. Upon moving back to Canada in 1995 and taking up residence in Vancouver, Moka met Mad Child, and along with K-Prevail, now just Prevail, the three emcees founded Swollen Members one night at a Denny's, with Moka coining their multiple meaning name. However, a group dynamic was not for Moka and he soon moved on to a solo career.

In 1995, Moka Only started flooding the local scene with a myriad of music, quickly earning himself the nickname of "The Most Prolific" by self-releasing cassettes on an almost seasonal basis, which led to a few vinyl releases and finally album deals with a variety of labels. All the while, Moka was building a name for himself as a strong and skillful emcee with down-to-earth subject matter ranging from hip hop to fashion, from food to travel, and from love to sex. Although best known for his rapping, Moka was also building his resume as a a quirky producer with a knack for mixing live and sampled instruments. While the majority of Moka's musical output has been self-produced, his beats are also sought after by a wide range of underground artists.

With his solo career as both rapper and producer on the rise, Moka Only participated in a few collaborations with Swollen Members resulting in Moka rejoining the group for Monsters in the Closet, their 2002 collection of b-sides and rarities featuring three new songs. He remained on board for Heavy in 2003 but left again prior to the recording of Black Magic. Once again Moka had found himself confined as part of a group.

His time with Swollen Members, which also saw him signed to the Battle Axe label, resulted in three consecutive Junos, but it also meant a decrease in the amount of solo music from Moka. "The Most Prolific" returned in 2005 beginning with the release of The Desired Effect, his Nettwerk debut that realized a much greater pop potential for Moka. Unhappy with the label interference, Moka released a Japan-only alternate version under the title Dirty Jazz that was more to his liking, marking Moka's return to releasing the nearly seasonal albums of gritty, underground jams he has always been known for through labels like Camobear, Legendary Entertainment and Urbnet, as well as an occasional one-off project for various other indie labels.