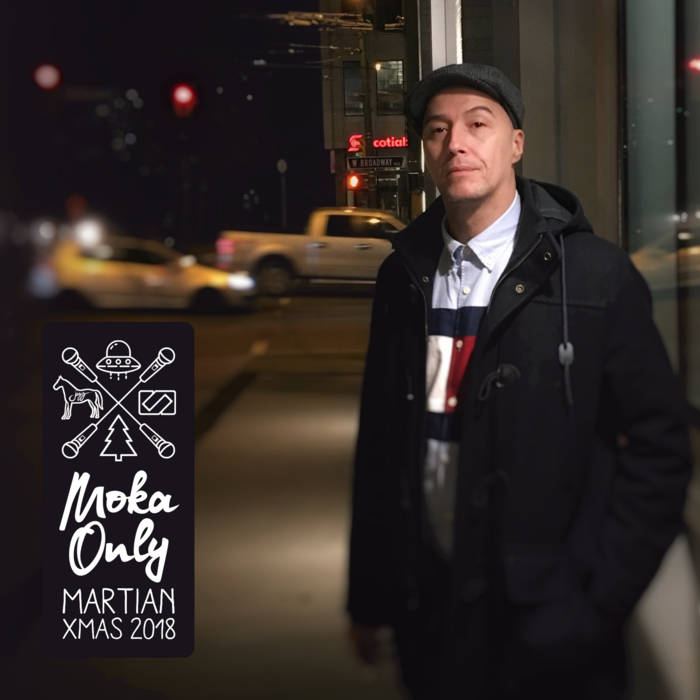 PRESS: GROWNUPRAP.COM
Christmas means lots of things for lots of different people. For us, it signals Moka Only dropping the latest installment of this annual series.
~~ grownuprap.com/2018/12/18/moka-only-martian-xmas-2018/


PRESS: Review: SCRATCHEDVINYL.COM
Over the years, there have been a few things that hip hop fans have come to expect every December. No tradition is as longstanding and consistent as Vancouver emcee/producer Moka Only’s Martian XMAS series of albums. After a year of relative quiet from the prolific artist, he has come back once again with Martian XMAS 2018.

If you’re unfamiliar with the series, Moka’s not producing straight up Christmas albums, instead opting for a general December/Winter/Holidays theme. What this means in terms of sound is that he’s not leaning heavy on sonic signifiers like sleigh bells, but he is tweaking things to reflect the colder sound of winter, maybe leaning on piano a little more than usual, and adding some key samples here and there. On 2018, I especially appreciate the samples of some King of the Hill Christmas episodes, which are used to provide some humorous framework to a couple of songs on the album. Moka does go to the vaults for a few songs on the album, but it’s a testament to how consistent he’s been over the years that I didn’t realize he was doing this on the first listen through the album. Overall, you once again Moka Only playing in his wheelhouse, with jazzy boom bap beats and his melodic laid back delivery on the mic. There are plenty of stories and riffs on subject matter related to the time of year, whether it be “Morning Biscuits,” “Swiss Chalet,” or “Winter Convo.” It’s a really easy listen from start to finish, and exactly what we’ve come to expect from Moka Only after all of these years. While Moka initially planned this album to have a lot more features and to be a more collaborative project, he ended up with only one guest on the album, Dave Psy, who adds some spice to “Greetings.” While collaborative projects are fun, and I’m sure we’ll get one in the near future, Moka is more than up to the challenge to carry this album on his own. You certainly won't feel like anything is missing.

Martian XMAS 2018 is another solid entry into the jampacked Moka Only catalogue. After a period of relative rest, he’s returned to show that he can still deliver a fresh quality winter album and give fans exactly what they’ve come to expect every December. 8/10
~~ Chi Chi | scratchedvinyl.com?q=node/4157


Winter is officially here and Moka Only's new album, Martian XMAS 2018 is now available on URBNET! This edition of Moka's infamous and annual winter-themed release features a guest appearance from Dave Psy and is full of 20 tracks fit for this frozen season.

"It has once again been a pleasure to create another piece of this world, in which you fans have been gracious enough to be a part of, and I love you for it. Enjoy the jazz and please continue to ride with me and help spread the word." - Moka Only

WOWEE. 2018 and the Martian is still keepin' it icy and crisp. I probably say this every year, but 'this one is special’. I believe it is stronger than last year's but that’s a matter of personal preference. I was fortunate to get a head start on this year's edition at the beginning of November. The first track I recorded was ‘Word up, Get up’, and that totally sparked off the whole mood. Extra jazz! Horsejazz, that is. I'm probably putting too much on it but i will say this - this edition sounds to me like if you mashed up both 2010 and 2016 Martian xmas albums together. I wanted to get more guests on this and had planned to do so…cats like Chief, Jon Rogers, A-ro, JuneTen, Brady, and Dank, but not to worry, we have plenty other stuff coming so salute to those guys. Dave Psy did manage to add pepper a few tracks though, so I definitely didn't go it completely solo-dolo. Torchlight Commission still rollin! The weather in the Coovity Coov lately has been very conducive to this project, as it’s been comfortably cool during the day but frosty at night. I don't know what it is about this city but I keep being able to squeeze so much inspiration out of it, seasonally. It just goes. I wanted to include a couple of joints from the vaults on here; things that were pretty much prototype vibes or precursors to the Martian series. First up to bat in that realm is 'Habitat'. This was a track I created in December 2001 after returning from Xmas holidays with my fam. It was inspired, evidently, by some night time strolls I took around my old stomping grounds...aka the 'City of None'... in the Longmile. (Torcharoons will know what I mean). I spoke of rollin to the movies, getting stranded for a ride, then being spotted by some fans and driven to my rest, (I can't exactly recall that, oddly enough) and walking through the L late night with a 'vit on my sleeve' (coffee in hand). This was probably my first beat with a five bar loop structure. Anyhow, I only had a rough of the vocal take on an old cassette and the fidelity was not up to snuff to be included on here as is, so I did a vocal retake. Fortunately I had enough pieces of the original beat from ADAT to stitch it all together. A valiant effort with decent results. The other track from the vaults is the final joint on this project entitled 'Lets Connect, Boulevard’. This was a direct extraction off an old ADAT tape in which all I had to do was a current mix of it. This one was made the day after Xmas 2002. I remember I had taken a float plane ride back into Vancouver and it is evidenced in the lyric "rode into the harbour on a steel bird wing'. I also had an autograph signing in Vancouver that day when I got back where I met two awesome fans that gifted me a Gucci watch right then and there. Wow. The beat on this track is a little strange, by the way, I was going through a techno-synth inspired phase around that time, henceforth the sonics on this particular ditty. Anyhow, let me wrap this up. It has once again been a pleasure to create another piece of this world, in which you fans have been gracious enough to be a part of, and I love you for it. Enjoy the jazz and please continue to ride with me and help spread the word. Big thanks to St. Mic. for the stellar mastering, to my man Dave Psy for the peppers and of course to URBNET for making releases like these a reality through all these years. Blessings! - Moka Only