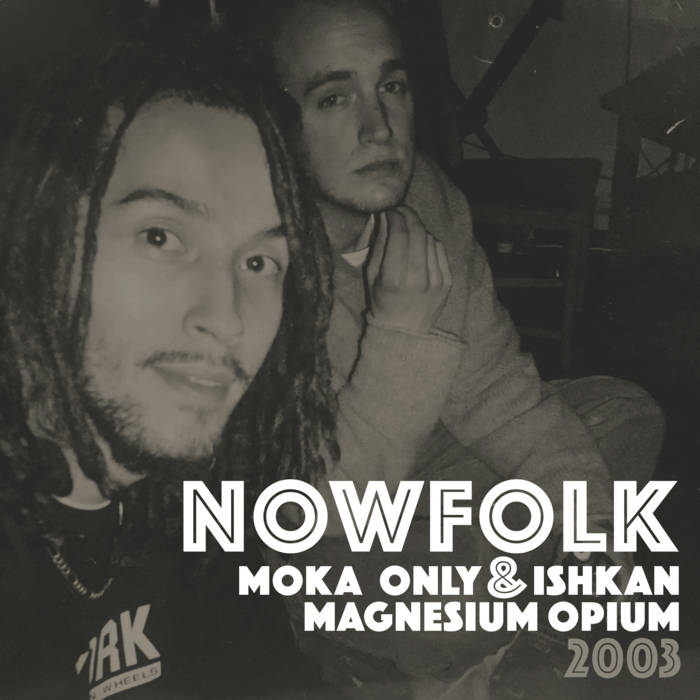 ABOUT:
"Well, here goes... Magnesium Opium. Finally. There has been a considerable amount of folklore amongst longtime fans surrounding this album: “Was it ever completed?”; “why was it never released?”; “what's the story behind the title?”—that kind of talk.

Let’s take a sec to look back: the early 2000s were an incredibly industrious time for myself and my peers in music. We had big rap dreams, busy schedules and bountiful ideas—all amidst what some would consider to be the “last big hurrah” of the music industry as we knew it.

As for the nowfolk album, Ishkan and I had been recording music under the group, Moniker, since the mid-late nineties and had released two albums already: Style Gangstas (1999) and The Moon (2001). During the late fall of 2001, we hastily launched into a project called The Winter. We ended up shelving it, and at the start of 2002, decided to work on something we felt would be more substantial (a more updated nowfolk project, if you will). We worked on the album incrementally from January 2002 until June 2003. Around June, I had a conversation with a fan who told me of a crazy dream he had involving finding a “lost nowfolk album,” and in the dream he recalled the album being called Magnesium Opium. I told Ish about the dream, and we unanimously decided use it for the title.

It's kind of amazing that we didn't have a real album title until the project was wrapped. That's unusual. As I mentioned previously, it was a very busy time and between my solo work and touring with my main group—I was swamped.

At the end of June, my Adat recording system was destroyed virtually stranding the nowfolk album from being mixed and released along with many other solo projects. I know I've brought this up countless times, but it has to be rehashed to accurately tell the story.

Anyway, all I had were very rough mixes on cassette and cd of “mag op”. I acquired new recording equipment and really didn't look back from that point plus Ish moved to Victoria in the fall of 200,3 and it ultimately slowed our nowfolk aspirations to a near standstill for years. When I finally acquired a replacement Adat lx20 unit a couple years ago, I began to unearth and mix mag op using my rough tape mixes as reference. Then, I reassembled the album chronologically in the exact order that we had recorded the songs.

Now that URBNET has granted me the opportunity to release an album monthly for 2016, I knew that it was the perfect time to bring Magnesium Opium to the world.

Upon reviewing and scrutinizing the album from start to finish, it's interesting to hear the phases we went through during different seasons. The album starts very playfully with “I Got Some Shit that You'll Love,” (Ish and I were definitely on the bug out tip with that one!) From that point on, the album seems to drift into an ethereal and almost mystical vibe for the first half of the project, as exemplified by the track “LifeLike Part Two.” It seems to float like its own planet in some other plane of reality. One of my favorites on the first half of the album is “That's the Way That We Do It.” I remember I had to leave on tour that morning, and was waiting for the tour bus to pick me up at the crib. Ishkan came over and we took the challenge of having mere minutes to record a new song before I had to get on the bus. I mention in my rap about it being put down "in a minute." We actually pulled it off! After “LifeLike,” the album seems to go through a playful state again with “Yeah Yeah Yeah” right through “It's Like That.” Which was recorded during the late summer through fall of 2002. “Another Short Story for ya” is almost bizarre, and Ishkan's raps and styling baffle me pleasantly. You can hear our style change once again by “In a World Husslin” which was recorded right before New Year's Eve 2002. The beat I made felt like a new futuristic direction for us, and seemed appropriate for entering 2003. I love the pictures Ish paints on his verse with “pots and pans clangin’/pieces clap at the clouds.” Dope stuff. The track “Change the Way” was recorded Jan 1st or 2nd, and continues the futuristic -feel we were edging, both in beat style and overall vibe. You can hear an underlying tone of real optimism in the track. I was also finishing up my Lowdown Suite album at the time, and I was happy to have Ish represent on the track “Magnificent” which was recorded a day or two before “Husslin.”

I was also living in both Vancouver and Los Angeles then, alternating my time between the two cities which explains a significant gap in the nowfolk recording sessions as “Where Ya Be At” wasn't recorded until spring 2003. In fact, the final few tracks on the album were recorded weeks apart, through late spring until June 2003, and the final two tracks were recorded only a day or two apart. “All The Way” is a bittersweet effort, as it signifies the end of an era, and it was the last official nowfolk song recorded.

Things were never the same again after, for both my recording and the music industry on a whole, but the story is not over yet. There have been a couple brief 'nowfolkish ' attempts since then, including a track we recorded for 2008's Carrots and Eggs album on URBNET (still available).

There are plans underway for Ish and I to record a new nowfolk album strictly utilizing unused Moka beats from 2002! So here's hoping to that becoming realized. I think by finally releasing Magnesium Opium it will provide some closure and bring to reality a more plausible possibility of a future for nowfolk. By the way: Ishkan is also a member of my crew Torchlight Commission.

In conclusion, regarding Magnesium Opium, there is just not enough space to say and express everything I'd like to about the album and that era. There was just too many fun nights and laughs while recording; too many Shell gas station coffees; too many great recording breaks to hit up Cactus Club restaurant; and just too much awesome wizardry to accurately describe. I get so much joy re-listening to this album, and I sincerely hope you will too. !"
~~ Moka. February 15th, 2016.

"Magnesium Opium.... At long last. First and foremost I have to thank my brother Moka Only. While Nowfolk is a an opportunity for me to write and record songs, the brunt of the work always falls to Moke who spends countless hours pouring over the details of beats, mixing vocals, editing, and in general keeping the spirit of our group alive with his tireless inspiration. His Torchlight Commission is aptly named as he continues to light the way for artists like myself who occasionally drift in and out of obscurity.

This album, like any album, is a period piece for us. Like an old photo album we can pull out and laugh at silly things and be in awe of the moments of something unexpected. Music is our way of diarizing our lives. A time capsule filled with relationships, style trends, and growing pains. This album in particular is a reflection of a time when every day was a sort of lead up to being in the studio and making as many songs as possible. Filling Moke's amazing beats with the daily events and nightly stream of consciousness it was a real era of 'The Folk' as well as our other crew The City Planners. To be able to finally release old material like this not only gives us something for the longtime fans, but lets us revisit the dream space we were in when creating it. And for all the verses where my voice sounds off or I'm ahead of the beat or...a bit sloppy on this and that, this is still a collection of magic for me and I'm stoked to have it shared.

For all the people still checking for NowFolk… we love you and will continue to share our music with you and invite you into our weird world."
~~ ISHKAN