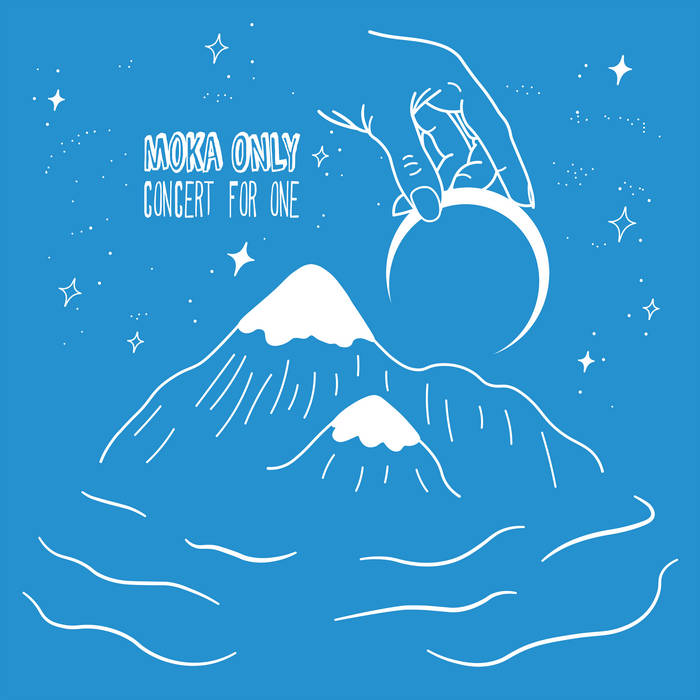 Eric Stewart I've been listening to Moka for 16 years and somehow he manages to blow me away even now. Favorite track: Right There.

RastAcostA Moka can rock beats so well. Favorite track: Are You Happy Now.

PRESS: RAPREVIEWS.COM
This album lives up to its title well - it's your own personal concert, from Moka Only's personal take on chill hip-hop. This is an album that will only grow in value to the listener over time.
~~ rapreviews.com/archive/2017_09_concertforone.html


PRESS: BLACKOUTHIPHOP.COM
The co-founder of the Swollen Members, also known with the mysterious aliases Ron Contour and Torch, Moka Only presents his new LP Concert For One with the same admirable tenacity he used for his 2016 12 for 12 rollout. The album is packed to the brim with 20 dusty, raw, and jazzy tracks from the Vancouver rapper-producer, in addition to a slick guest verse from Detroit’s own Dank (of Frank n Dank) and artwork from Montreal’s Vanessa Malo.
~~ blackouthiphop.com/moka-only-concert-for-one-album-stream


ABOUT:
"some eggs just scramble themselves. Some carrots need to be viewed from a distance before being deemed worthy of the arrangement(s). Within the vast world of music that dances around this spherical realm we call 'home planet' or 'Sklaub', there remains one anomaly whom has constantly challenged... nothing... Nothing, that is unto a plebian/millennial construct which has constricted the very tentacles that once squeezed some sense into a previous generation. Moka, or rather 'Kareem Serene' has no need to challenge this void. His ceaseless tendencies to unfurl the unfurl-able have made him a staple among the musical intelligentsia of the ageless grand crevice: the consumed ones who cannot simply flick a switch off and make this madness silent. This brings us to our next observation: Concert for one, which beckons simple queries. Is it concerting to a basic mind that he chose to rewind the quartz to shine a light unto a past era which truncated before its full potential? Did he really unveil the newest stage of his "Versace filter game" wherein his beats opened a middle chamber to allow his voice to occupy a space forlorn by the current crop of dust? Did he really record this entire album on an SM58 stage mic and other beat up handheld relics? Will the so called 'journalists' develop enough testicular fortitude to see to it that these details are expanded upon to a clueless generation and/or to awaken the previous one? These questions remain in flux particularly in the wake of 2017's solar eclipse which may or may not have scrambled a few eggs as well. As you read this Moka may very well be in the midst of making his own broth on his korg triton and other gadgets too crude to mention here. His provocation shall provoke the snoozers of past lore and titillate the stimulated breed previously mentioned. He will cum on the world regardless, the choice is not yours.”
Shugie Footsmith --- The Jazzer's Gazette , 2017.


PRESS: THEWORDISBOND.COM
Moka may flaunt the traits of a musical superhero through his years of accomplishments, but he has never been one to disappear into the night. He embodies what today’s artists strive to attain. That is to say, the experience, the wins, the brain power, and the unbelievable creative will that fuels him. This hero is nowhere near done, and that’s apparent on the stellar Concert for One, which is bursting with melodic, soulful boom-bap.
~~ thewordisbond.com/tune-in-to-moka-onlys-concert-for-one-album-for-a-one-in-a-lifetime-ride/


PRESS: SCRATCHEDVINYL.COM review
Normally, when an artist takes nine months between albums, that feels like a pretty quick turnaround. When that artist is Vancouver emcee/producer Moka Only, nine months feels like he really took his time, especially since he just came off a year in which he released an album a month for the entire year. Now that he’s caught his breath from that project, he’s back with Concert For One.
While I appreciated the novelty of getting an album per month, the quality of Moka’s product wasn’t always as consist as it could have been. He’s always been a prolific artist, but even for him that’s a tough output rate to keep up. Now that he’s relatively slowed down again, he’s come back with an album in Concert For One that’s up there with anything he’s released in his long career. He’s not doing anything unexpected or unusual here – the album is still full of his signature laid back, jazzy beats and smooth melodic flow on the mic. It’s really just more about making sure that not only does each song work, but that each song fits with the rest, and that the whole thing flows from start to finish. Concert For One certainly does all of that, and even though the album has twenty tracks, it doesn’t feel too long or and nothing feels like filler. It’s just a lot of nice grooves, fun wordplay, and a really good time. My only minor complaint is that we’re getting this album as summer is winding down, because Concert For One feels like it would be a great soundtrack to a summer beach party.
Sometimes it’s the small things, but after cranking up the output in 2016 and losing a little bit of the quality, it’s nice to see him come back after a short time away and really nail it with Concert For One. This is definitely one of the best albums in his extensive catalogue.
~~ 8/10 scratchedvinyl.com?q=node/3232

Moka Only’s latest album Concert for One, is set for release on September 1st 2017 via URBNET. As the follow up to his 2016 ’12 for 12’ opus, Concert for One delivers with such admirable tenacity, something that fans are accustomed to from the powerhouse artist. Notably so, this full-length twenty-track album features a guest collaboration from Detroit’s own Dank (from Frank n Dank), and artwork from Montreal’s Vanessa Malo (Instagram: @vnilla_art).

Daniel Denton is something of a super hero. An iconic artist in Canadian hip-hop, based out of Vancouver, performing musical feats under any one of his mysterious aliases. Guised as Ron Contour, Torch, or most notably, as Moka Only, his delivery is consistent and unmatched. He is an acclaimed underground champion, and a true storyteller with an unfathomable collection of stories to tell.

Moka works as a multi-faceted artist, and has been writing, producing, and creating relentlessly since the late nineties. He has celebrated acknowledgment through a 2015 WCMA rap recording of the year nomination, and three Canadian Urban Television nods. As Co-founder of the collective rap group Swollen Members, a name that Moka recalls, with tongue in cheek, coming up with while “…sitting in a Denny’s”, and “…because I liked the double entendre”, his successes garnered him Three Juno Awards, Seven Platinum Plaques, and Seven Muchmusic Video Awards. He has also collaborated with legends such as MF Doom, J Dilla, and Grand Puba, and has toured internationally with artists such as Tanya Morgan and ILLA J, only to name a few.

Fast-forward to 2016, a truly remarkable year for Moka, in which he continued to progress and expand his creativity. Released via URBNET, Moka gifted fans with his 12 for 12 project, a mammoth musical feat that saw him putting out one album every month, for the entire year. Each album curated from a palette of anecdotal quips, time hops, and relativity.

With countless years of accomplishments under his belt, Moka may flaunt the traits of a musical superhero, but he has never been one to disappear into the night. Moka embodies what today’s artists strive to attain, that is to say, the experience, the wins, the brain power, and the absolute creative will that fuels him. This hero is nowhere near done.