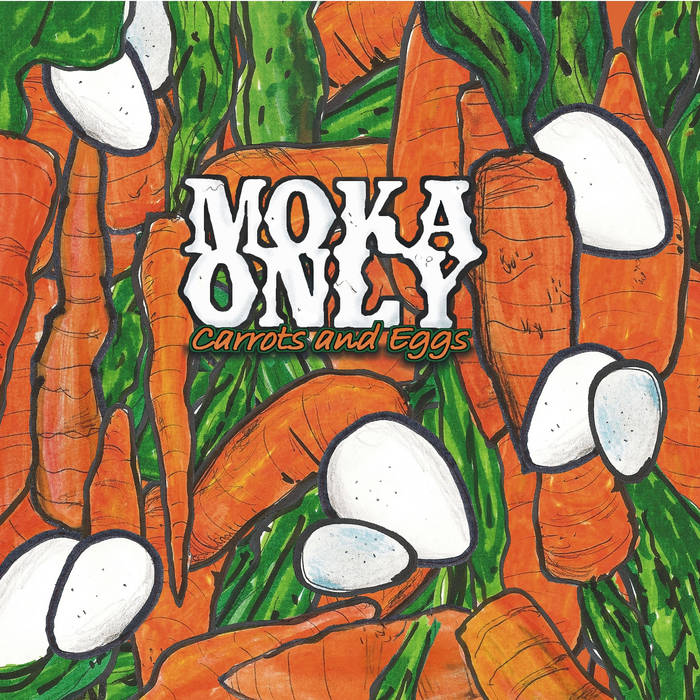 Hi persons. Moka, back in this yet again, thanks for investing your food, drug, beer, diaper, toilet paper or weed money into this excursion. I rest assured that you'll be able to pull nutrients, thought and even enjoyment out of these seeds and veggies here. I'm a get right to the gristle. I figured I'd return to the ol' track by track rundown of the album. A little blip and blurb regarding each stringy yolk or heap of peelings, so here I go:

CARROTRO: My man Stu Kubrik hit me with the initial narration piece that plays before the actual track starts. Thanks, man-person. I suppose the the main meat of carrotro is both to disclaim misleadings and to re-introduce me as well as a brief toot about my current activities. The outro part or coda is my man PSY welcoming you into the womb of the monster, he narrates over a peppy patch of musical tit. He is all through the album.

GROWNMAN TROUBLES: This was something T dug up on my system hard drive, made it back in 05 and never put into on any album. Sounds like I was in a bit of a funk hole, maybe somebody stepped on my sneaker that morning. Then lefty brings carrots to the boss but he's not satisfied.

HARDLY SAY: A little sniffy, bup-type beat I dreamed up for a beat CD I was doing in January 08. I decided to use it for myself. Hollered at my man Bootie Brown (God Bless The Pharcyde) and he jumped on it and did raps. I did raps. Mine was off the top. I have skills.

FELT BEFORE: My man chief from Switzerland hit me with this beat, it was actually for a compilation he was puttin' out and I was so pleased with how it turned out that I asked him if I could use an alternate take for Carrots, the lyrics were inspired by this dream I had about returning to some place I had spent time at as a child with my mom, at least the hook reflects that. I love this song...

ON AND ON/CITIZEN X: Another one from the vaults from 2004, the first beat/song is obviously a nod to midnight marauder era, tribe, thats unmistakable. The Citizen X part is brand spanky-butt new. Some raps about nosey people and current events. The hook is sung as if I'm speaking to the listener, I'm with you, ya brats.

ENEFF: Wow... miracles do happen. Back in november 07, Ishkan made a surprise visit to my vancooo cribbo and wanted to do raps. We did these raps plus others that you'll hear in the near future. The beat is hairy. They were caramelized. 'Kan's raps still baffle me, that's good, show me your bloobs, cross your fingers for a new Nowfolk album.

THE DOOR: This one was made for an album I was making in 06 called way-west. I didn't put out way-west but as you'll notice, I was kickin' around the Carrots and Eggs back then and even earlier. Everybody says this one harkens back to an early Beatnuts sound. Cool. The outro part is new, salutations, boring lil' cool raps. Then evil calls from the goose pond on Granville and lefty brings the right mount of carrots to the boss.

COLORS DONT RUN: A funky, funky remix of a trak from Clap Trap. Total tits, one of my fave beats I've done in awhile. Underground ruffnecks, pounds of respect. The outro beat was from 02, a snippet of a trak I had made with Ishkan in like ten mins before I bounced out on tour. PSY is noticeably weird on this outro. Arm.

MAGAZINES: A track from yet another aborted project called Summer Summary that Camobear was supposed to put out. Just freestyle raps about my magazine abuse habits. Then there's a set up for Starfish. Must have been late July 07 when i did this, sounds late nite too.

STARFISH: Another from the summer summary thingy, a song about the sea creature and she creature. My man Sean O'Haggin from the High Llamas inspired this one cus he is such a musical testicle, (that's a compliment people) and it ain't no fun if the homie cant get none of that glockenspiel on the pre-chorus. Saltspring vibes.

SILVER LINES : An instrumental break that was conceived while making a new beat tape. Been kinda into the one bar loop/substitution styles lately. Let the sun shine on you and do what you do if you are looking for ruth, ruth booty.

INSULAR: An alternate take of a Clap Trap track. I made all the music parts on a cheap Casio synth. The drums sound like they spend two weeks buried under wet sand at Parksville Beach. Yum. Yuck. Flex your rap hands to this one while you recite it. The outro is an excerpt I found on Youtube. Type in 'n-word teacher' and get a giggle. Wow.

THE NEW ERA/ B-BOY POCKETS: I'm very grateful to have one of my all time fave emcees on this. Sadat does what he does best on this, now thats real 'swagger' young-ins take note. I almost didn't want to even put my own verse on after him. The b-boy pockets outro was just breakin' down a lil term that Ishkan and i came up with in 95 or so.

FER SURE: This is the super coolout, Okanagan Valley kinda vibe, just coolin' out as only the mammal can do. Y'all wish ya could too. My mind plays tricks on me, partially. The outro part that follows the main song is a lil beat my man Stu Kubrik slid me, I added a lil extra wazoo to it, perfect for Buck 65 to tell us camping stories over. Thanks Rich.

I MEAN BIZNIZZ: Buck 65 hit me off with this... we've been sending each other beats back and forth lately, reconnecting, challenging each other. One of these days you guys will hear our secret project we are cookin'. hiya, buddy!

CLAPSNARE: Man, cats been using the voodoo clapsnare over and over like we used to do with the funky drummer break... problem is that its mostly pop r&b that jacked this clapsnare... such a beautiful sound and they played it out. I don't think Amhir Thompson ever saw that coming, so I jacked it myself to make my point on the hook, now, the next movement of this track, which doesn't appear in the listing is something i call 'there could only be one', basically a very cerebral take on a sexytime theme. Your themeship has left the dock of morality. There are some very dark undertones in this movement. Who thought fucking would ever sound this melanchollie? Perhaps in the back gutter of my mind it was more of a plea to the subject

OBSOLETE CREATURE: Everyday I'm hustlin', thats it, plus Ishkan does the chorus with me. Bless his heart. Late November vibe.

SALT: Instrumentality over high cholesterol and such. Peep the 'melba' at the end. then me and PSY discuss Eric Wright and his approach to the mic.

TIT FOR A TAT: Another November night vibe with Ishkan on the hook. Sour as a sour key covered in lemon juice. A lil new jack swing taste snuck in there too. Then Ishkan goes on a safari while muttering to himself.

COMMUNICATE: Originally made for my terminated 'Way-West' project, revamped for this here. Thanks to Shauna Baker for helping shout the shouts on it with me and the guys. Communication is key otherwise feelings may happen.

PUT MY WORK IN: For this song I tried to make a similar vibe to 'Felt Before', sort of washed and airy feeling, a lil truth in da booth. I need to make more jammies like these. Sex. Its working. Don't choke on the yolk.

STAY: Well, well, well, my fave jam from my Japanese album 'Dirty Jazz'... I just made a few minor adjustments and added an extra layer of rhodes on it. Peep the raps, its real talk, I don't get serious that often on the rap tip, but yeah, I was feelin' some thangs. This jam was from 2005 just so ya know. Thanks again to PSY and Buck 65 for the narration duties.

hip-hop hip-hop/rap moka only other Vancouver