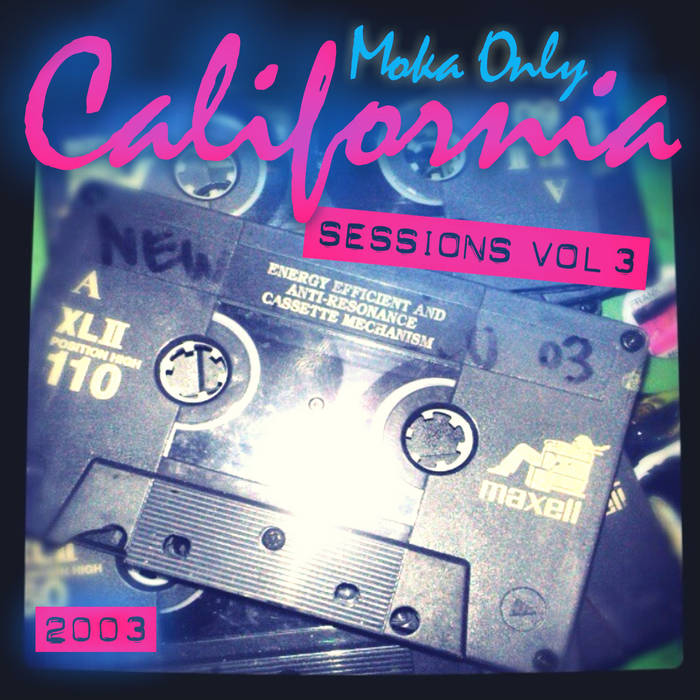 Yes yes, back once again for the hundredth time. Yup, u heard me. 100. This project is one from the vaults of 2003 and is the final instalment of the California sessions series, which I came up with back then while floating back and forth between Los Angeles and Vancouver. Ima go track by track on this one for y'all so u get a better idea of the overall itness and allness. Give it a minute, let it sink in ya.

#1: 'Show Me Special': If I recall correctly, I think I whipped this off after a visit to Vancouver Island and had a night there before I had to get back to LA. The 'sit like a Hummel ' line was used again years later on my Doctor Do Much project. The original version of this song had a longer outro but I thought it was wack, so I cut it off short haha. Also I was real into doing spacey intros on some songs around this era and you'll hear that on a few of the tracks on this project.

#2 ‘Something's Going On’...man I was definitely on some mellow vibe that night. I recall this being a Sunday night on a Vancouver stopover, feeling some momentary solitude.

#3' Zing Zing'.  When I made this track with Ishkan, I’m not entirely sure what my inspiration for the beat was. Quite possibly Neptunes inspired. That's my best guess. The chorus sample was from some ol’ children's album... like a schoolyard type of song. Ishkan's verse on this is once again as mystifying as any of his great works. This song almost ended up on Magnesium Opium. The cat you hear at the end is my old homeboy Jag, who was at the time doing a mix of Reggae/Bhangra/Soul in his own music career. Fun song.

#4'Hot Shit'. Had fun with this one too. Silly little melody with some synth drizzle on top. This song was also where I invented my current alias, Kareem Serene. I remember just writing that line on a whim cus I wasn't sure what to rhyme the previous line with. Glad I came up with that. This song is def on some bragging type ish. Oh, and I DO eat samosas. Not sure why I wrote that I don't. I baffle myself. Peace to my man Que D on the hook sample.

#5' Hope It's True’. This one almost didn't make the cut! I accidentally erased it shortly after recording it on ADAT at the time, but luckily I had dropped a rough mix onto a cassette tape before that happened, and that is what you are hearing here. From a damn tape! Luckily my man St. Mic, who does my mastering, knows what he's doing, cus believe me this one was pretty damn dusty. Come to think of it I may have even erased this cus I thought it was wack at the time…I don't know for sure. This was a little ‘whatever’ kinda song, nothin heavy. I REALLY wish I could recall where I got the main sample from. If any of y'all recognize it please let me know. What a silly song, jeeez.

#6 'Friday Night'. Once again another silly jam about nothing much. Haha. You gotta understand that I'm very aware of the nature of the music I put out. To me it's not important trying to show you how "lyrically wild" I am, I'm more about just capturing snapshots. That's it. Was in a nice little mood when I made this one. Dumb little song indeed. Love it.

#7 ‘Funky 123’. Oooh, another brag fest. This beat sounds metallic. Makes me chuckle how I mention that "I'm always trying to chop up electro for samples". Jeez…funny cus there aren’t actually any samples in this one, let alone electronic ones. I actually thought I was on some future shit when I made this one. haha, was a good time jam tho.

#8' Drummee'... okay, first off, know I used this on Cali Sessions Vol 2, BUT I felt it made more sense here from a conceptual continuity perspective. This beat was a throwaway that became the next track, ’Rock to the Rhythm’, after I messed with it some more. Same drums mostly. Still, I think it captured something and was also off a rough cassette tape. Not entirely sure why I used it on Vol 2 and really, the song 'This is All I Know' from Vol 2 would've made more sense to put on this project, as it was actually done around the time I made this batch of tracks. So was 'Chamarvellous', come to think of it, but that one worked fine on Magnesium Opium.

#9 'Rock to the Rhythm’. I've always loved this joint. What a nutty little specimen. THERES NO ACTUAL DEFINITIVE MELODY!!! I did my best to make the music on this as absolutely random as I could. A lot of little live additions and also something that is rare for me, but this song has THREE, count em, three verses. I don't think I could ever pull off another jam like that but sure nuff' used that hook a few more times hahaha. I still have another one to release from 2003, with a similar hook. Anyhow this one sounds like a funky, warped dream. For some reason I was on some no cursing shit around this time. That sure didn't last long. Fuck.

#10' Astral Strum’. Another interlude. In the early 2000s my man K-os used to come to the crib sometimes to build on music and life. This beat was from one of those sessions. We came up with a little guitar idea, he played it on my acoustic and recorded it into the mic, and I set some drums to it. Funny session…I also remember him bringing a big bottle of wine with him and doing push ups on my studio floor. I really think this captured the mood of that summer.

#11 'Why You On My Mind’. This track was also one that was inadvertently erased but fortunately I had a rough on cassette. A rare topical song inspired by underwhelming events at the time. The lyrics say it all really. Fun beat tho. Seems I was really into using weird little vocal snippet samples around that era. The keys were played. I have a random memory from around the time I made this track, of rolling to new Westminster at night with Ishkan and another friend. I have no idea what kinda mission we were on, but it just pops into my mind.

#12 'Mystic Moke’. A beat that I had intended to rap on back then but forgot about. Also rescued off a mangled cassette tape. The reversed bit of audio at the end shows how mangled this cassette had gotten. I love the vibe tho. Sounds like a mystic summer night.

#13 'Check me When I'm Chillin'. Originally this was suppose to be on Cali Sessions Vol 2, but honestly I felt that it didn't fit the vibe, so I kept it for this as a bonus track. Very electronic vibe with the arpeggio synths and all. I was doing some wild little cartoony things with my voice on this one. Good lord,why? Still, I think it adds to the overall weird-goodness of it. I took a little extra time when I made this to create a coda at the end that deviated from the main melody of the song, and goes into a half-time groove.

Anyhow, that’s all for this one folks. Hope you enjoy, and as I always say, I'm happy to get feedback or if you have any further questions about these tracks, I am always glad to go into further details. Peace!