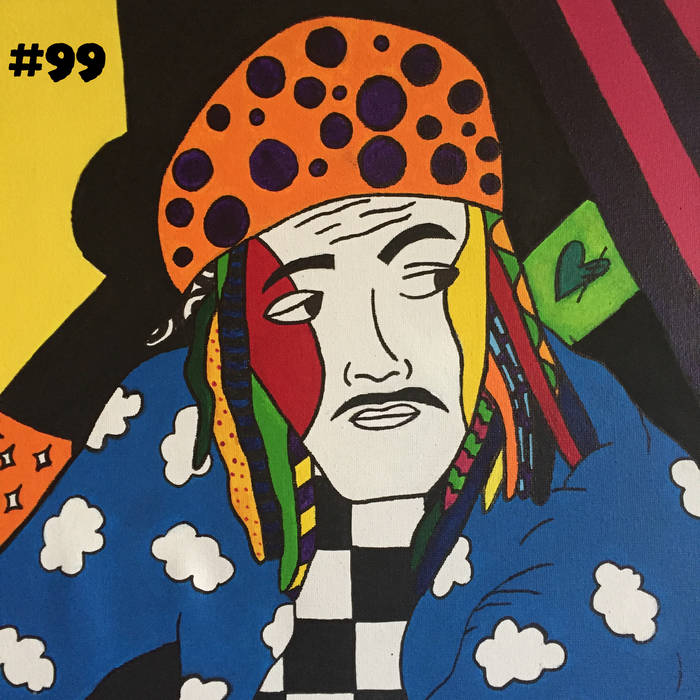 I'm writing this bit on the album at 4am in Kamloops, BC after rocking a show, still underground, still grinding like you wouldn't believe.

When I think about this project, I realize this marks my 99th release, at least that's what I counted on wiki. There could be more considering there were a few very minor projects that came out under the radar, or were simply passed around to friends and such. Doesn't matter. I like the title 99. It signifies something, perhaps the change of guard? The brink of a next era? That's up to your perception, of course.

I like the songs on this project. The majority of them are newly constructed from this spring and early summer. A couple surprise older joints on here too, because I felt they fit the mood.

The song “Catching up” is from summer 2014 when I was working on a project called “My Fat Organ”. Who knows if that'll ever come out! Anyway, it fit nicely here.

Who the heck reads these liner notes anyway? Who cares? I'm legitimacy curious! I keep writing them, I want to know who keeps caring. If you actually read these and get something out of it, please let me know, hit me up.

I do them. I do songs. They are mere moments of my “artness” in this current antigravity of 2016 where we are all becoming disengaged and averse to actually being present. Can we reset ourselves and get back to soul power, please? It's my only true wish. My wish for the feeling to feel feel-able again in this music life or whatever surrounds it. I should go back to recording on four track cassette again. Who would care though? I would. I'd like to see and hear that. I make memories and jot down remnants, then present them to you in all these gunky forms. I'm stuck with this. A few of you are stuck with me.

I like the song “Simple Dumb Shit”. How's that for a title, huh? It is how it sounds. Word to rob base, only it doesn't take two, it seems like it only takes one. I'm in the Torchlight Commission. I don't know what's left of it. I guess, I Am the Torchlight Commission! We have issues between ourselves. It is a beautiful dysfunction. So mote it be, right?

The song “Huh, Earth What” is funky. It had to be the album start. It's a bit older, but was crucial to kick this set off.

Anyhow, enough about me and my sauces. I'm sleepy. You are too. I hope you get something good out of this album. I want to hear about it. Or maybe I will just keep getting swept under the rug. It's whatever. I love doing this shit though.

Okay, see ya later!
Moka Only